Taking Stock #44: Is the retail apocalypse a blessing in disguise?

Recently, I read something that posed the following question: Is the retail apocalypse over?

What can we do, you may be wondering, to turn things around? Maybe there’s nothing we can do. And maybe that’s ok. Because it’s just possible that this problem, this so-called retail apocalypse, is unavoidable.

Maybe there are too many retailers chasing the same customers, offering the same products at similar prices. Maybe we’re witnessing a much-needed readjustment of the sector, a rebalancing of the store-to-customer ratio. The value of retail sales in the UK has steadily increased while store closures and retailer collapses have become common. Retail isn’t dying but it might be shedding its skin. 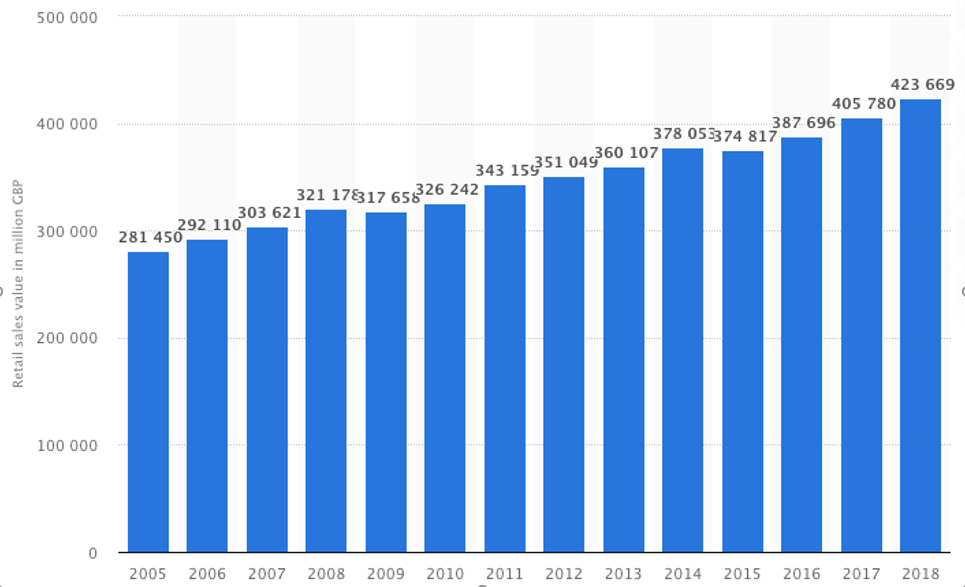 Here in the UK, where I’m based, there was a wave of out-of-town shopping mall construction in the 1980s and 1990s. It followed the collapse of manufacturing in many parts of the country – a collapse that led to large vacant plots of land, high unemployment and economic stagnation.

There was a lot of positive energy behind the decision to create retail destination sites on the fringes of cities like Birmingham, Manchester, and Sheffield. But it also set the scene for a future problem. The shoppers who visited the new malls were the same people used to do their shopping in town and city centres; they weren’t new customers. The money they spent out-of-town was money that was no longer being spent on the high street.

It seems so obvious now that you might wonder why no one saw the problem they were creating. Building many more stores would eventually lead to some kind of collapse or apocalypse in the retail sector.

Back then, no one could have predicted e-commerce. The rising tide of online sales has left many store-centric retail operations completely stranded. Many retailers were already balancing too many stores. When online shopping caused footfall to drop further, many were in unsustainable situations.

But that’s not the only thing that’s changed on the retail landscape. Shoppers’ behaviour and attitudes are constantly evolving.

Fashion is a big part of the retail industry and not long ago, fast fashion was all the rage. But there has been a change in attitude among some shoppers. As more of us take a greater interest in how our actions affect the environment, the fashion industry has attracted criticism for its consumption of natural resources such as water.

Did you know it takes around 3,000 litres of water to produce a single cotton T-shirt? If you drank three litres of water every day, it would take you almost 10 years to drink the same amount of water that goes into producing a pair of jeans.

That’s a lot of water being used in the production of the fabric and the items themselves. Add on to that, the emissions relating to manufacturing and distribution, and the harmful chemicals involved (pesticides on crops, chemicals in dyes and treatments) and things don’t look great.

The European Environment Agency (EEA) reckons that between 1996 and 2012, people in the EU increased the number of clothes they bought by 40%. The EEA also estimates that more than one-third of the clothes we Europeans own haven’t been worn for at least a year.

Green is the new black (Sustain Your Style)

Similarly, the UK charity WRAP (which stands for Waste & Resources Action Programme) thinks there might be $39 billion worth of unused clothes hanging in the UK’s wardrobes right now.

That’s a lot of clothes literally just hanging around. It’s no surprise a growing number of people want to keep wearing clothes longer, nor that the market for second-hand clothes is doing well; recycling helps ease the burden we place on the environment.

However you choose to look at the situation, there are simply too many shops chasing not enough shoppers. Meanwhile, e-commerce has given physical retailers an existential crisis and shoppers are starting to worry that pointless overconsumption is harming the planet.

It doesn’t feel great to constantly sound full of doom and gloom. But this all feels like the perfect recipe for a retail apocalypse. You would have to be very brave to open a store at a time like this. But that is exactly what many, many people are doing; last year, in the US, more than 4,000 new stores opened.

There are thousands upon thousands of people out there in the world right now who are dreaming, scheming, and planning to open a shop of their own. Retail, far from facing annihilation, is going through a period of transformation.