It is 57 years since the USSR sent the first person into space; cosmonaut Yuri Gagarin blasted-off on 12 April 1961 and completed a single orbit of the Earth. His journey lasted 108 minutes and accelerated the USSR vs USA space race, which shaped much of the Cold War rhetoric throughout the 1960s and 1970s.

Since then a total of 536 people have been into space, although only 24 have gone further than Earth’s orbit. That’s a lot of space for not a lot of people. Gagarin himself was only 1.57m in height (that’s 5’ 2”), as there wasn’t a lot of space in the cockpit of his space capsule. How ironic. But since the 1970s when NASA landed astronauts, interest in space has declined – especially since the demise of the Soviet Union. 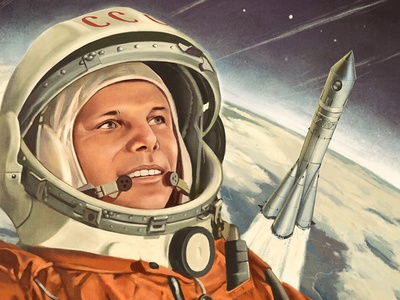 Back here on terra firma, however, space is currently attracting more attention than ever. Particularly the kind of space that relates to warehouses and distribution centres.

In the UK there has been a lot of attention paid in recent years to the problem of the declining popularity of local High Streets and in last week’s Milkman newsletter there was a link through to a story on Bloomberg about America’s declining shopping malls. Apparently: “more than two-thirds of US malls saw a decrease in national retailers” in 2017, while in the UK, independent stores are shutting down, while national chains (from banks to travel agencies) are reducing their store networks.

It’s a sad tale and one we’re all familiar with.

Something else that attracted my attention in the same Milkman newsletter was a story about the rapid rise of warehouse land values; up from $50,000 per acre in 2016 to $100,000 in 2017 (an acre is roughly equivalent to 40% of a hectare). What I thought was particularly interesting was the speculation contained within that story that vacant retail space could be repurposed into storage and distribution space.

It also made me think about the food sector. Recently a UK chain of high-end burger restaurants announced it was closing almost one-third of all its outlets as it attempts to save itself. I’ve eaten in restaurants where there were more Deliveroo and Just Eat drivers coming and going than paying customers. The kitchen staff are working flat-out while the waiting staff hang around looking for something to do.

Everyone is used to hearing someone say ‘change is the only constant’ but not all changes are equal. We’re witnessing change of an unprecedented nature. In food and in retail there are spikes of demand sitting alongside some very profound slumps – inside the same business.

I don’t know if Yuri Gagarin ever joked about not having enough space inside his spacecraft, while he was surrounded by the infinity of outer space back in 1961. But having too much space in one place and not enough in another is definitely a problem many retailers can identify with here in 2018.

Converting unwanted malls into warehouse space might sound like a great idea in theory. I’m not sure it really stands up to much scrutiny though. Here in the UK there’s already a surplus of unwanted warehouse space. What’s wrong with it? Some of it is in the wrong place. Some of it is the wrong size. Almost all of it is too old and – like a lot of things that are too old – too inflexible to be adapted to cope with modern life.

There are no quick and easy answers to the retail space conundrum, sadly. But a gap has already started to open up between those retailers who are able to stay in step with changing customer behaviour and those who cannot. The space between those two groups is only going to get bigger; 2018 looks like it’s going to be every bit as interesting for the retail world as last year was.

Strap yourself in tight, comrade, it could be a bumpy landing.