Money makes the world go around…

In 1972, cinemagoers all over the world flocked to see the movie Cabaret, starring Liza Minnelli. Described as the musical for people who don’t like musicals, it is set in Berlin in 1931, just as the Weimar Republic is about to give way to hateful Hitler’s hideous Nazis.

One of the stand-out songs is Money Money, which includes the refrain ‘money makes the world go around.’

Why am I babbling about Cabaret, you may be wondering. Well, this morning someone said to me “more than ever, it’s logistics that makes the world go around” and since then I’ve had that song from Cabaret stuck in my head.

One door closes and another one opens

Here in the UK, where I am based, one of the country’s oldest and most respected retailers, John Lewis, has closed its nationwide network of 50 department stores – because of the situation with the coronavirus. I found this out as I was buying something and the shop assistant told me she had just heard about the closures. She was visibly shaken by the news.

Many of the staff from the closed John Lewis stores are being redirected to work in the group’s grocery business – Waitrose, which has 338 supermarkets and a home-delivery e-commerce channel. Like many other grocery retailers, Waitrose has struggled to keep its shelves stocked in recent weeks. That’s partly because a lot of people panicked and bought far more than they need. But it’s also partly because supply chains run so lean that it only takes a modest increase in demand to cause difficulty.

Redirecting resources from its department stores to its food network makes a lot of sense. Most, possibly even all, grocery retailers are now hiring extra staff. Some will work in-store and some behind the scenes. If you’ve already got people on the payroll, which John Lewis has, redeploying them where they are most needed is a great idea.

Despite the empty shelves in supermarkets all over the developed world, there has been a consistent message – there are no shortages, there are just delays. It takes a lot longer to fill a shelf than it does to empty it. The more people there are shifting crates and boxes through distribution centres, into vehicles and then unpacking those crates, the better. Shelves will no longer look bare and that will send an important message to the public – it’s ok, you can calm down now. 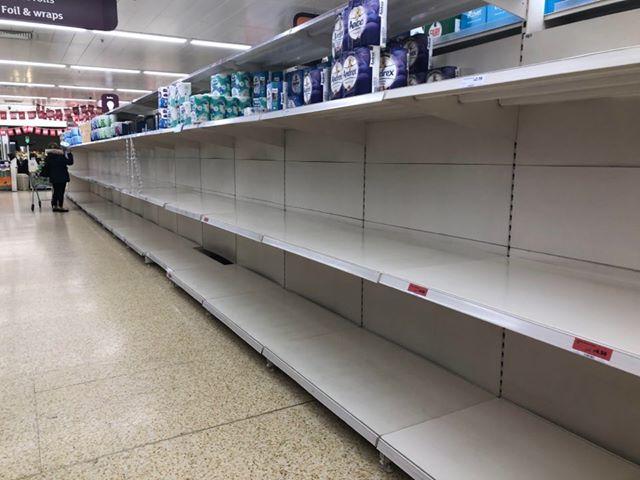 Panic is an irrational, emotional response to a situation you can’t control. When you witness panic it’s easy to get carried away by it and start panicking too. No amount of reassurance gets through to someone in the middle of a panic. But when there is evidence around you disproving your anxious beliefs, it becomes easier to regain control of your feelings.

Be excellent to each other

This last point has very little to do with ecommerce, logistics or retail. It’s far more general than that. If you are self-isolating or are on lockdown, if you are social-distancing and just trying to stay away from people, look after yourself and those around you. It is very easy to feel like you are under siege or a prisoner, and that everything is dreadful. Especially if you are cut off from friends and family.

Allowing yourself to fall into a negative and pessimistic view will only make things worse. Your mental health is just as important as your physical health. It is possible to take the situation seriously without falling victim to fear and anxiety. Figure out what helps you cope. Maybe it is reading, or meditation, playing with your children or chatting to loved ones via WhatsApp. Whatever it is, and there is always something that helps a little, make time for it every day.

You can’t control much that goes on in the outside world. But you can control what goes on inside your mind. Please, keep yourself safe in mind and body.