Tacking Stock #28: Opening the door to a world of delivery solutions

The challenges facing the last mile in the parcel delivery world are many and varied. This is something I suspect you already know. But no matter how many challenges there are, at its heart the delivery sector has just one overarching objective – to deliver the parcel to the customer.

So, I was very pleased to see that at this year’s Consumer Electronics Show (aka CES) in Las Vegas there were many delivery-focused ideas on display.

One in particular really stood out. It’s called the eDOR.

It’s a great name. Most startups in the tech space try to lose vowels from their names (Flickr, Tumblr, Grindr all spring to mind). Not the good folks at Strategic Innovations, though. Oh no… they took the word door and added a vowel to the front. Oh, and they also dropped one from the middle. Anyway, it’s a cool, convention-defying name that gives you an idea of what’s coming up. This, they boldly proclaim is “the solution to ecommerce's biggest problem!”

Failed first-time delivery is the scourge of the industry. It wastes time, it wastes money, and it annoys customers. Anything that cracks that problem is doing a great job for a great many people. Is it the biggest problem? I don’t know. But it’s got to be in the Top 3, I reckon. Don’t you?

Furthermore, and this is one of the things eDOR talks about a lot (no, not the door itself – it’s not a talking door. That would be ridiculous!), it can also help tackle the problem of porch pirates.

“Shiver me timbers,” you may be thinking. “What be these ‘ere porch pirates ye be talking about?”

Well, me hearties, they’re ne’er-do-wells who steal parcels that have been left outside other people’s front doors. Off their doorsteps. From their porches, no less. According to the eDOR gang, around one-third of Americans have had a parcel stolen from outside their front door.

So, how about the courier leaves your parcel inside your front door instead?

This is where eDOR steps in. It’s a smart door made up of… well, doors. Doors to concertina-style compartments or boxes that can hold your parcels. 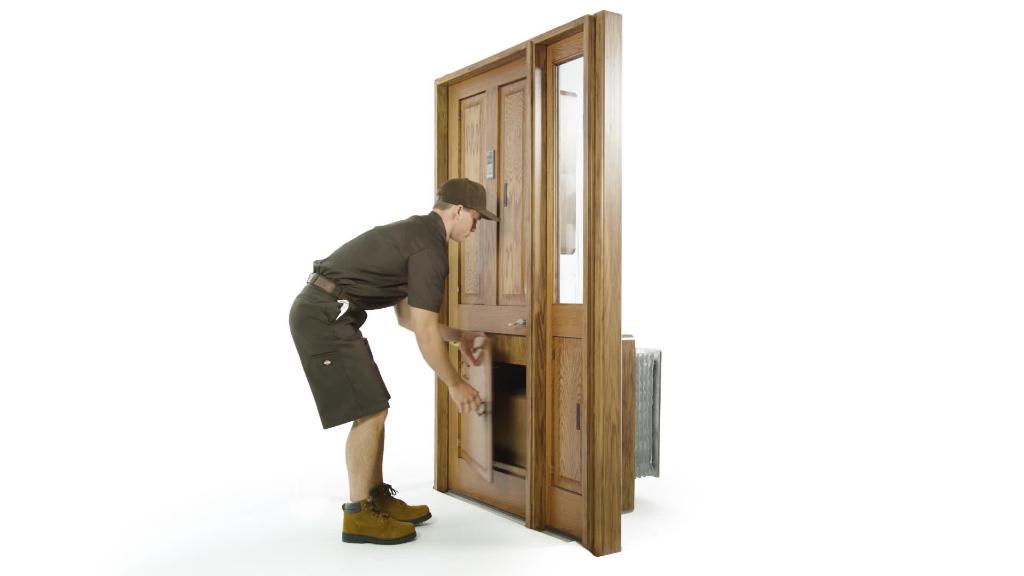 Pushing at a door marked ‘pull’

Picture the scene, the courier arrives with a delivery but you’re out. They can unlock one of the secret doors that your actual door is made of, open up a compartment, and place your parcel safely inside. And by the way, that compartment is called an eBOX.

It’s fiendishly clever. The courier stays on the outside of your front door, they don’t need to get into your home. Your parcel meanwhile is in a kind of limbo between the outside and the inside, waiting for you to retrieve it. A kind of parcel purgatory.

There’s even a tall, slim eBOX option that can hold your dry-cleaning. I know! I found that amazing too – imagine having a dry-cleaner that makes home deliveries. Incredible.

If, like me, you’ve already got a front door don’t worry, because according to the eDOR website “a door is the easiest component to change in a property…”

Really? How much trouble have these guys had changing a lightbulb..? I digress.

Somebody’s mocking on the door

I accept it’s easy to mock innovation. Much, much easier than it is to design, create, and market a new idea. There’s little skill involved in pouring scorn. But it serves no one to accept things at face value – it’s important to critique new ideas, and to do so robustly. How else will they improve?

Front doors exist for a reason – to keep the outside out, and the inside in. The more secure your door, the more secure you will feel. If you’re unconvinced of that point, try to make your door very insecure and see how you feel when you turn out the lights and go to bed. We all want to feel secure in our homes.

I visited the website of one of the UK’s leading replacement door manufacturers. Security is clearly very high on their customers’ list of priorities, as it gets mentioned a great deal. This is what they have to say about the construction of their doors:

“Our composite doors are made from fibreglass with steel reinforcement and an energy-efficient polyurethane core, making them extremely strong. Each door boasts a robust 70mm thickness for extra strength and security and the sealed unit is secured with concealed metal brackets to prevent the removal of glass from outside.”

How would a door made of smaller doors that lead to expanding boxes stand up in a security test when compared to a steel-reinforced door, I wonder. I don’t know the answer. I’m not sure a comparison test has even been done in a rigorous test environment. But you’d have a hard time convincing me a door with holes in it is as sturdy as one without.

Am I going to reduce the overall security profile of my home – or office – so that I can avoid missing a few deliveries? No, I’m not. I’ll use more click-and-collect services instead, or only buy from retailers whose delivery partners can give me real-time notifications and on-the-fly amendment options.

I could, of course, be wrong about the security compromise. But that’s my perception. And the thing about perception is that it tends to have a great deal of influence over the way people, think, feel, and act. Missed or even stolen deliveries are one thing. Having my home burgled is another.

And that’s before we get round to the question of how easy it is to open your front door if one (or some) of the eBOXES are extended into the space immediately behind the door. Or what your dog might do to the eBOX if left unattended.

Don’t misunderstand me, I love the idea of the eDOR. I love the drive and commitment to finding solutions to real problems – in this instance, helping retailers keep their promise to the consumer, helping delivery firms minimise their costs, and so on. But fixing the last mile won’t be done by displacing difficulties or cutting corners. You aren’t really making life easier or better for someone if you replace one problem with another. It also won’t be done by one single silver bullet solution. It’s a complex place with a lot of interwoven problems that need to be addressed holistically. Not hole-istically.