The feelings that we carry with us from the Milan’s Politecnico University E-commerce Observatory (good 20th birthday!) conference are all positive. The focus of the meeting was the presentation of the annual study on the status of e-commerce in Italy and in the world. A rich analysis full of interesting data that we tried to summarize for you. 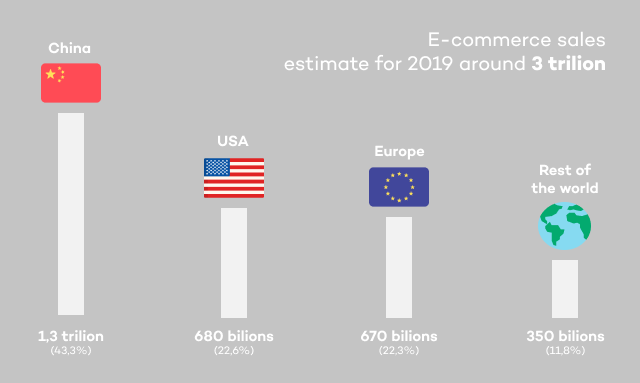 It is important to highlight the continuity of some phenomena such as:

- thedot.comleadership, see Alibaba and Amazon, thanks also to the acquisition of storage space and the internalization of logistics operations.

- e-commerce confirms itself as the transformative engine of retail.

- the increase in control and regulation (see PSD2 'Payment Services Directive 2', the new regulation on payment services that entered into force on 13 January 2018 and Web Tax, the bill that aims, in the era of the digital economy , to regulate taxation for multinationals operating on the Net, with the aim of guaranteeing fiscal fairness and fair competition).

- the ever more decisive control of costs and efficiency of processes, with relative increase in the level of service and customer satisfaction.

In Italy, growth is mostly due (again) to the purchase of products that reaches € 18 billion (+ 21% compared to 2018) with 281 million orders and an average receipt of less than € 70. The categories that drive this positive trend are Informatics & Electronics, which are confirmed as the first sector followed by Home & Living. Food & Grocery strongly grows (+ 42% compared to 2018 with coverage of the service that rises to 66%) while Publishing reaches € 1 billion. 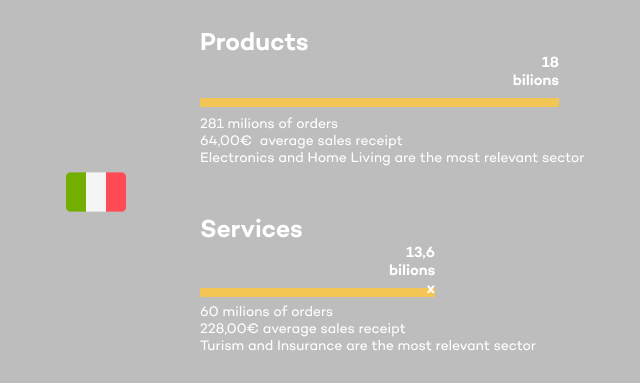 Services, on the other hand, are entering a maturity phase with an increase of just under € 1 billion (+ 8% compared to 2019) reaching 13.5 billion, thanks to 60 million orders with an average receipt of around € 228. Growth is once again due to Tourism and Transportation which, with € 10.9 billion, is confirmed as the first sector.

The most important figure, however, is the one related to the overall penetration: Italian e-commerce, despite still representing 7.3% of total purchases, is responsible for 65% of the growth of Retail (online + offline). While total consumption is almost stable (+ 1.5%), online purchases are up 15%. 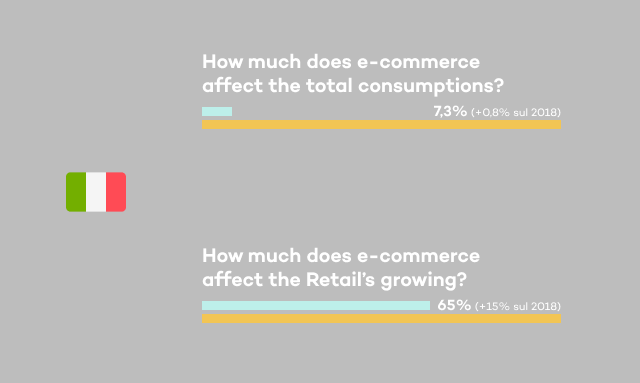 Another interesting fact is related to the devices used during online shopping: in 2019 the value of online purchases from Smartphone grew by 6% compared to 2018, going from 34 to 40% of total e-commerce. Desktop remains the preferred device but shows a significant decrease going from 60 to 55% in just one year. A victory of the smartphone now seems imminent (it is expected between 2020 and 2021). In absolute terms, purchases from smartphones touched + 33% compared to 2018.

From a logistical point of view, 2019 will hit 300 million orders with around 320 million shipments (excluding returns) + 18% compared to 2018, with an average of almost 1 million parcels per day. The flows are mostly concentrated in the North (46%) where most of the Italian population resides, followed by the Center with 23% and the South (21%).