Going to the Post Office can be a messy experience, in Italy, at least. Example: you have to ship a parcel. You wrap the item so it doesn’t break. You drive to the Post Office and hope not to get stuck in some traffic jam. Then you get there and there’s a line. Half an hour lost. Buy the box, fill out the forms, ship it.

Luckily, there are services today that come directly to your home, retrieve the item, box it and find the most convenient courier for the transport. Easy, isn't it? If everyone embraced it there would be a lot more vans on the roads, though.

According to John Curtis, on the "Daily Record": "Congestion is one of the major challenges facing cities and towns yet we are blindly ordering more and more products, many of them unnecessarily being delivered in almost ­unbelievably short ­timescales. According to a report by the Centre for Economic and Business Research, congestion cost each household in the UK £1426 per year in 2013. By 2030 it is forecast, that this will have risen to £2057. The annual cost of UK congestion is forecast to rise from £13billion in 2013 to a monster £21billion by 2030". 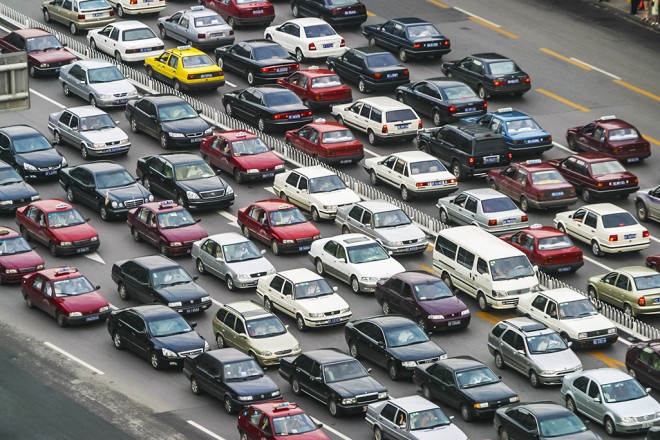 On the contrary receiving stuff at home is getting more and more comfortable: same day deliveries are the rage. Compulsive shoppers may buy two or three gifts in 24 hours and jumpstart the same amount of deliveries. That makes for half a dozen van trips.

The future, before flying drones and wheeled robots, could become a nightmarish landscape of traffic jams, entirely made of branded delivery vans. A battle royale of moving logos, honking and racing to get there first.

But are we sure we really need same day all the time? That everything we buy is a priority? On-demand deliveries are a good slice of the market but remain a premium, luxury service. They are expensive, in many cases. As Evan Schuman writes on ComputerWorld: “most shoppers today believe that same day delivery is not something they typically want, need or have any interest in paying for, except in a handful of unusual, last-minute, urgent purchases. They would like same-day to be available if it’s needed but do not want to pay for the rare privilege”.

One of the good things about being human is the ability to plan ahead. Imagine how nice a once-a-week scheduled service would be. The courier comes to your house (and all the others in the neighbourhood that have chosen the same subscription), let’s say on friday at 6 PM. He delivers everything you bought since the previous saturday (what you didn't need right away!) and he takes delivery of all the stuff you have to ship or return. Since today's deliveries need to be totally customer-centric the same service would be highly customizable: you'd like it more often than once a week? Done. You don't feel the pressure of modern life to the point that you want it just once a month? Done. You choose the options. And there have to be many.

No stress, no high costs, no traffic on the road.