Amazon & Whole Food: is a Mixed-Demand Shipping Strategy on the Horizon?

The talk about the Amazon-Whole Foods affair mainly concerns three well definite fronts: a) Amazon wanted to play big in a sector, Grocery, in which his pre-acquisition strategy wasn’t giving ground-shattering results; b) Amazon wanted some prime-quality real estate to physically display its best selling tech products, such as Echos and Kindles; c) this real estate is already located near the affluent Prime-subscribed user base, so it’s perfect to be used as mini-hubs for last-mile deliveries.

It’s a lot but could not be everything. Direct profits from Whole Foods itself will probably be unremarkable. But the gains brought in by adding a more cyclic nature to its delivery model could be huge. Grocery deliveries are usually paid more than parcel deliveries and have a good geographical granularity. This means that vehicles doing paid grocery rounds can add free-delivery parcels to their schedule. More: they could carry items to be presented for a last minute flash purchase. Not random items, but those that the user is more likely to need, based on his purchasing history (click to download Amazon’s “Anticipatory Shipping” patent).

This is a virtuous model, quite safe from the vagaries of that fabled on-demand delivery which has brought down one too many startups (Shyp was the last one to get K.I.A.). You sell added services to the shopper and take advantage of an already planned delivery. 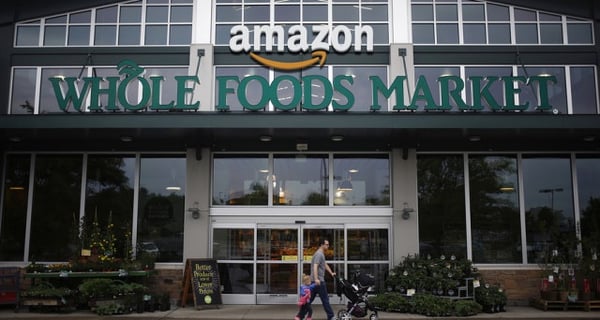 We already wrote about something very similar in our post on the virtues of a mixed-demand model. Grocery is the only on-demand sector in which it could be possible to survive. So: if Amazon creates a mixed-fleet, doing both food and non-food deliveries with the same vehicles, it adds density, which translates in efficiency and a cyclic nature to the whole B2c operation. Another win-win for the Big A., and maybe a good example to follow.